Every time I see the term “social distancing” my mind hears “duram” (தூரம்) the Tamil word for “distance.”[1] It was used as an interdiction for the distance savarna women in my grandmother’s time were supposed to keep from the rest of the family while menstruating—often in a back room or separate hut—because they were considered impure; and also by upper caste people to refer to the distance that dalits or lower caste people were supposed to keep from them because they were considered defiling. In Tamil, ecchil (எச்சில்) referred to the contamination of spit or saliva, especially related to leftover food or refuse; and by extension to ecchilar (எச்சிலார்), dalits or lower caste people who were forced to accept leftover food as payment for services.[2] I’ve used the past tense advisedly because that’s where both sets of gendered and caste-inflected practices belong—in the past—but they thrive unfortunately in the present, and in other languages and regions. India has always had its theories of purity and pollution, its society ordered by fears of contagion and containment. From the famines and Contagious Diseases Acts of the colonial era to the Swachh Bharat (“Clean India”) campaigns of the current government, India has long been seen by western and home-grown elites alike as a land teeming with people and plagues.

With some of the most densely packed cities of the world and 500 documented Corona cases as of March 23, India’s response to the Corona virus had been praised by the WHO, though according to the BBC, India had tested just over 14,000 people as of Thursday, March 18. With the Corona virus hitting virtually every country, India has joined those imposing travel restrictions and urging people to work from home, and initiated a somewhat belated public health campaign.

A little humor goes a long way; circulating in diaspora social media last week were playful cartoons of cheesed-off goddesses washing multiple sets of hands and cleverly mashed movie posters like the classic action-adventure buddy film “Sholay” with the protagonists sporting face-masks and bearing a rescripted title “Dholay” (dhole: “wash up”). The reality of water shortages in large cities or the lack of potable water in slums and many parts of rural India is important context for the success of a handwashing campaign, but a video from the Kerala police force features six officers gamely offering handwashing mudras in a peppy dance routine. (Kerala also happens to be the state that boycotted CocaCola and Pepsi for siphoning off valuable groundwater during recurrent water shortages.) On another note, young Punjabi rapper, Dinchak Pooja released her song “Hoga na corona” (“There will be no Corona”) advising “There will be no corona, wash your hands, sleep fast, do not lose time, you won’t be tense” (Hoga na corona, Haath tu dhona, Jaldi se sona, Time na khona, Tension tum lo na.) 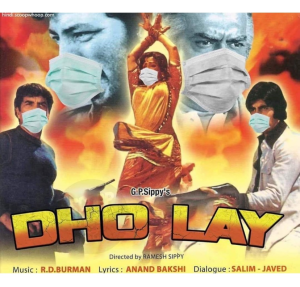 Such creative resilience in the face of adversity has long marked the public cultures of the subcontinent in an era prone to global pandemics now as in colonial times. While numerous observers are comparing COVID-19 to the 1918 flu pandemic, Mike Davis reminds us that 60 per cent of global mortality in 1918 was actually in western India where extractive grain exports to Britain coincided with a major drought. “Resultant food shortages drove millions of poor people to the edge of starvation. They became victims of a sinister synergy between malnutrition, which suppressed their immune response to infection, and rampant bacterial and viral pneumonia.” He warns that this history coupled with the unknown consequences of COVID-19 interactions with malnutrition and existing infections may lead to an even more deadly path in the urban slums of South Asia (and elsewhere in the global South).

If Davis is right that the danger to the global poor has been mostly ignored by journalists and Western governments, it is the poor and lower castes who have borne the brunt of an ill-conceived Swachh Bharat (“Clean India”) campaign, and nearly 900,000 poorly equipped, poorly paid, women community health workers or ASHAs who serve on the front-lines of India’s COVID-19 public health campaign—sometimes using their own funds to make masks to distribute to the 1,000-2500 families each is responsible for checking on for symptoms.

Before Indian Prime Minister Modi ordered the three-week lock-down, on Sunday March 22nd, he asked 1.3 billion Indians to observe a full day “janta (people’s) curfew.” It was not immediately clear what impact one day of social distancing would have, but it certainly had a chilling effect on the ongoing women’s and student-initiated protests against the controversial Citizenship Amendment Act (CAA) —leading to disenfranchisement of India’s large Muslim and Northeastern minorities—which entered their 100th day on Saturday (March 22nd). The new rolling curfews may also give Indians a sense of what life has been like in Kashmir since August 2019 when 7 million Kashmiris were put under indefinite lockdown and curfew with the abrogation of article 370 of the Indian constitution that gave Kashmir provisional autonomy. Unlike the rest of India, a good portion of which is internet-connected and has access to social media, there is little information or news that gets into or comes out of Kashmir, with internet, phone and other communications blocked. Indian security personnel have also been authorized to undertake COVID-19 surveillance in Kashmir.

[1] The root “dur” दूर is Sanskrit and also means distance in Hindi/Urdu and other languages.

Mike Davis. The Monster at Our Door: The Global Threat of Avian Flu (New Press, 2005)